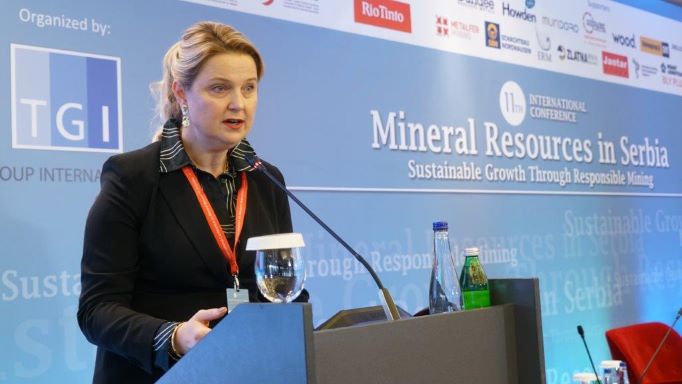 Sustainable development, responsible mining, green future and mutual support were the key words at the recently finished 11th International Conference on Mineral Resources in Belgrade, according to the organizer of the event, the company TGI Group.

Zorana Mihajlovic, the minister of mining and energy of Serbia, who opened the conference, said that Serbia “needs to participate in fighting the climate change and insisting on the green agenda”, and emphasized that everything done in relation to mining needed to be in line with the environmental standards, the press release reminds.

It is added that the ambassadors of Sweden, Finland, Australia and Canada have also supported sustainable mining and the green future of Serbia and that the ambassador of Canada to Serbia, Giles Norman, pointed out that “the world needs increasingly more, not less, mining”.

– The speakers at the conference openly and honestly talked about the problems they meet and the support and cooperation of everyone, from the Ministry of Mining and Energy, through investors, local self-governments, the public, the media and experts in these fields. There was also talk at the conference about the Law on Mineral Resources, its amendments, and special attention was drawn by the ladies with the topic “Women in Mining”, at a panel where Biljana Rankic, Dragana Savic, Slobodanka Lazarev and Elena Clarici shared with the participants their experiences and achievements and provided support to future female students of mining – says the memo of the organizer, which thanks all the participants, supporters and media sponsors of the conference.

CANSEE Canadian Serbian Business Association has been an auspice of the Conference since 2014. Ms. Mirjana Dončić-Beaton, CANSEE Managing Director, presented the association’s mining and exploration industry group and their development since the inauguration of the association.