Two CANSEE member companies are participating in this year‘s Best from Serbia competition. Stara Sokolova is competing in the category 22, The best exporter – Small and medium-sized enterprises, while Bilje Borča competes with its high quality tea brand LORDS in the category 2, Consumer goods – drinks.

The Serbian Chamber of Commerce, in cooperation with the Ministry of Trade, Tourism and Telecommunications, is launching The Best of Serbia campaign this year to choose the most successful trademarks and corporate brands in the domestic market, as well as the best exporters, events and startup companies. The campaign is open to all companies doing business in Serbia, competing for recognition in certain categories, depending on the industry, the origin of the company and the brand.
Voting officially began on October 25, and for the prestigious award “Best of Serbia” this year are competing 130 companies, which have nominated 190 brands in 24 categories. The number of applicants increased by 20 percent compared to the previous campaign, which is a clear sign that the “Best of Serbia” is recognized as an excellent way of promoting both brands and companies as well as the overall Serbian economy. Voting runs until November 6.

Based on the family secrets of rakija distillation and in cooperation with the most prominent experts in this field, the Bogdanović family has been cherishing and improving their centuries-long know-how in producing fruit brandies. The third generation has continued to develop Stara Sokolova spirits which have received many quality awards over the last two decades both in Serbia and abroad. Today Stara Sokolova produces 150.000 liters of rakija annually in line with the world and European standards having the recommended alcohol percentage, specific color, smell and flavour and the visual identity. Only fruit produced by the local producers is used, particularly mixtures of the old autochthonous cultivars and the new top quality fruit cultivars are used for rakija production.
70% of the products is exported to the markets all over the world, ranging from Australia, Russia, the Balkans and West Europe to Canada, the USA and Middle East.

Once a small family business, Bilje Borča LLC is currently one of the largest private companies in its field in the Balkans, with over 50 herbal end products in their assortment, and with leadership positions in manufacturing, processing and trade of herbs and herbal products that are characterized with rich assortment of semi-finished and finished products from medicinal and aromatic herbs. A wide range of intermediates such as bulk herbs, tinctures, extracts, oils and various finished products, including tea, drops, syrups and capsules have found their place in the markets in the region and in the USA, Canada and Australia.

Many years of experience in working with herbs and herbal-based products combined with the current trends in the tea and herbal tea industry has enabled the Bilje Borča company to develop the LORDS line of teabags. The aim was to create a product whose appearance, taste and price-quality ratio would be attractive to customers with middle as well as high purchasing power. 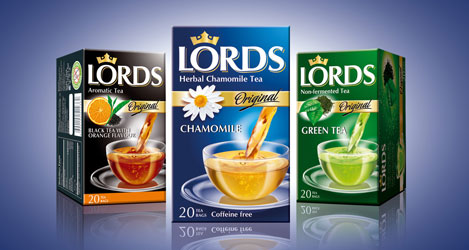