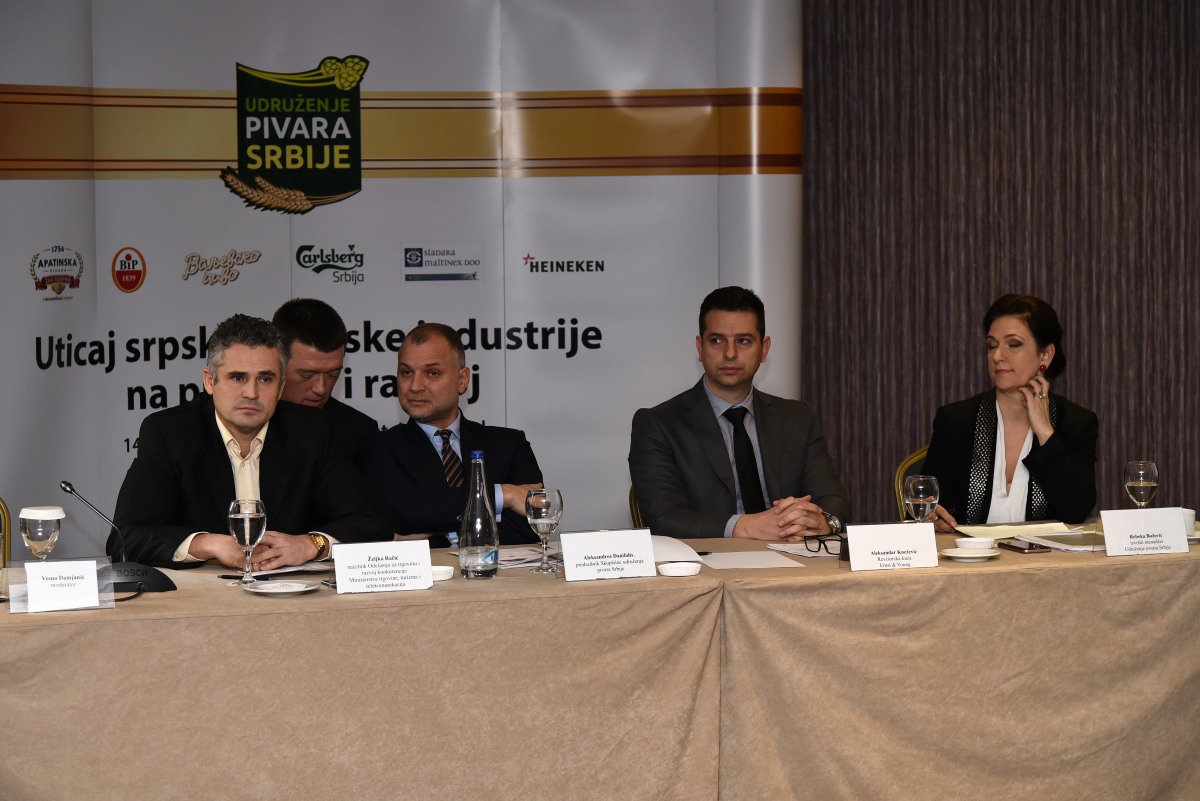 Serbian Association of Breweries: 235 mil. euros of state income in one year

On the 14th of December, conference on the topic of “The influence of Serbian brewing industry on economy and development“ was organized by the Association of Serbian Breweries in Hotel Metropol in Belgrade. The Conference was attended by the representatives of the Association of Serbian Breweries, audit firm “Ernst&Young“, Serbian governmental institutions as well as representatives of foreign Embassies in Belgrade. The purpose of the Conference was presentation of goals and achievements of Serbian brewing industry in past eight years. Members of the Association of Serbian Breweries in 2014 through excise taxes, social benefits, and contributions to the budget of the Government of the Republic of Serbia paid 235 million euros, or 3.3 percent of budget revenues. In other words, on each liter of beer sold, 30 cents went to the state budget, according to a study carried out by the audit firm EY entitled “The economic impact of the brewing industry in Serbia.” Total employment associated with the production of the beer industry makes 17,219 jobs in 2014, and in the chain of production and distribution, every employee created nine new jobs.

“The brewing industry is operating primarily responsible for the environment and the country. Sustainability is not just a number for us, it has its place among our key business priorities as reflected in the wide network of initiatives for responsible consumption of beer and driving, cultural and educational activities. Manufacturers of beer – members of the association, have strong self-regulation, strict rules, and regulations, even more than what is required by law. Our plan is to continue with the trend of growth, which will contribute to the strengthening of the Serbian economy, with responsibility and sustainability as the basis for all we do”, said Mr. Alexandros Danilidis, President of the Assembly of the Association of Serbian breweries. “In the current administration, we have seen constructive interlocutors on the topics that we have already opened, concerning the abolition of application of excise stamps on fruit wine or cider, improving the existing system for packaging, waste management, and more.” – added Rebeka Božović, Executive manager of the Association of Serbian Breweries.

In current circumstances, a joint effort of the economy and the state would result in an increase in production in the brewing industry by 8%.

The Association of Serbian brewery operates with six members: Apatinska Pivara/Molson Coors, Belgrade Beer Industry BIP, Valjevska brewery, Carlsberg Serbia, Maltinex malt and Heineken Serbia, which account for over 90 percent of the market and made significant investments in the beer industry.