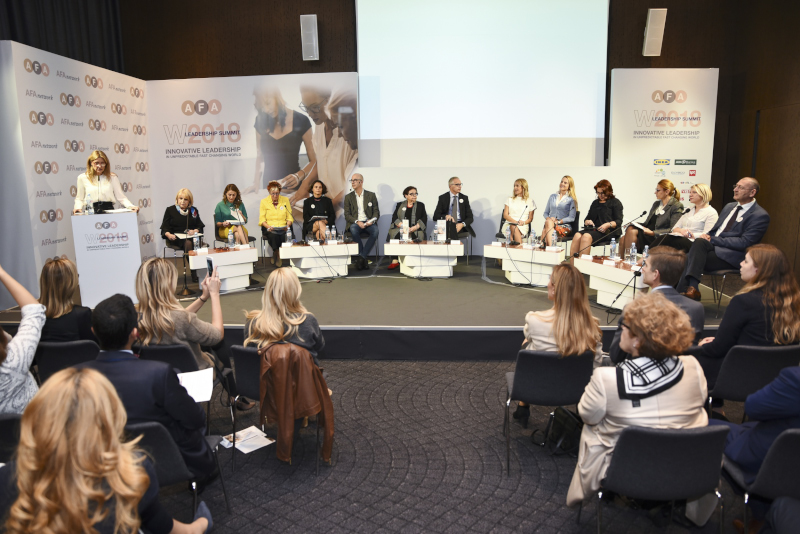 Another AFA Women’s Leadership Summit was held on October 31 and November 1 in Belgrade. This year’s theme of the summit was “Innovative leadership in unpredictable fast changing world” and also dealt with gender equality due to technological advancement and economic empowerment of women. The Summit brought together leading experts from various fields, representatives of the state summit, diplomatic missions and the non-governmental sector.

The AFA summit was open with a round table discussion on the topic of empowering women through innovation and technology. Moderator was Rina Bar-Tal, former president of the Israeli Women’s Network and members of the International AFA Advisory Board.

During the second day, the most influential representatives of the leading technology companies participated in panel discussions dedicated to the topics such as IT sector’s contribution to increasing gender equality in the work environment and education, corporate leaders managing change and using their businesses to address important social issues, including gender equality.

“Canada is proud to include feminism among the Canadian values that are promoted abroad. Empowerment of women and girls is an important priority for the Government of Canada. We pursue this goal not only to benefit women and girls, but because we believe it leads to a wider transformation in society which benefits the entire population.” said Ambassador of Canada to Serbia, H. E. Kati Csaba in her speech at Women’s Leadership Summit organized by AFA Network in Belgrade. The Ambassador also said: “A theme at the core of Canadian values is respect for diversity and inclusion. As a multicultural country, we see diversity as a source of strength. Our diversity includes cultural, ethnic, linguistic, sexual identity, and religious differences, and we strive for mutual respect and understanding, emphasizing what brings us together and not what sets us apart”.

The panel dedicated to entrepreneurship dealt with the topic of investing in technology startups and digitization and included the leaders in the pharmaceutical and healthcare sector who talked about how technological innovations can transform the healthcare system.

In the very end, representatives of the largest domestic business associations, such as the Privrednik Club and the Serbian Association of Managers, discussed the importance and the impact of networking, since, according to the latest research, the lack of networking is one of the main disadvantages and the reason why women are still less successful than their male peers.