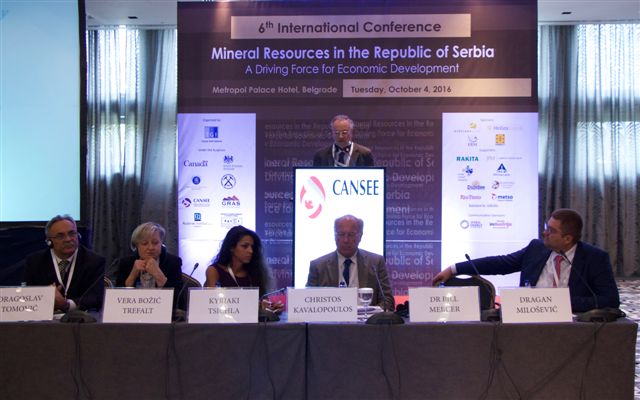 Dr. Bill Mercer: The most valuable thing that comes out of the mine is the miner

Bill Mercer, one of the leading Canadian geologists and an expert in health and safety in exploration and mining industry, was one of the speakers on 6th International conference on mineral resources in the Republic of Serbia, that took place in Metropol Palace hotel in Belgrade on October 4.

Dr. Mercer’s long career includes series of managerial positions and working on international projects in over 30 countries. Also, he has strong beliefs in the need for the exploration industry to improve its environmental, health and safety performance. Dr. Mercer is the founder and chairman of PDAC Health and Safety Committee, as well as the winner of many prestigious awards including “David Barr Award for Excellence in Leadership and Innovation in Mineral Exploration Health and Safety”, “Award for Environmental Excellence”, PDAC “Environmental and Social Responsibility Award”. He is also a recipient of the Queen Elizabeth II Diamond Jubilee Medal for his service to the Canadian mining industry.

At the Conference, Dr. Mercer spoke on the topic of Health and Safety in the extractive industries where he gave the insights about the best standards on evaluation and control requirements. CANSEE had an opportunity to talk with Dr. Mercer at the Conference opening.

Dr. Mercer, you have a very rich career, during which you have worked a lot abroad. On which country should we look up to when it comes to health and safety standards?

I wouldn’t say we should look up to countries, but to the specific companies. Larger companies tend to be much more organized, and I would say that the best health and safety practices and standards have companies from Canada, Australia, USA. Australia has a very good system and they put a lot of effort in health and safety issues.

In your opinion, which profession is riskier – geology or mining?

I used to work for the biggest Canadian mining company, Noranda, which had offices all around the world. One of my jobs was bringing together all the health and safety information for the company. All the offices would report instances to me and I would put them together with the information about mines and smelters. Quite often the exploration group had worse statistics than the mining people and the smelter people. I think exploration people think exploration is very safe and mining is dangerous, but actually mining people have less accidents. I think that’s because mines are very specific and very organized locations. It is very important to collect information of this kind, because people don’t know this. And, if the people don’t know, they can’t take the necessary measure to improve safety at work.

Could you name some situation that led to increasing of the awareness of health and safety importance in exploration and mining industry?

The most dramatic thing in Canada was so called “Westray disaster” that happened about 20 years ago. It was a coal mine accident in Nova Scotia, where a number of people were killed due to methane gas explosion. I am mentioning this one because it caused changing of the Canadian law. Federal government realized they cannot charge the people with negligence because there was no law to cover that kind of a situation. People running the mine knew that there was gas in the ground and they did nothing. So the government introduced a clause in the criminal law, next to the clause to do with the arm robbery. They are in the same category now and the potential sentence is life in prison. That tells us a lot about the large responsibilities in exploration and mining industry and health and safety importance.

In Serbia there is a lot of small companies in exploration and mining. What are the first steps they should take when it comes to health and safety?

It is important to develop safety culture as a part of company’s culture. Safety is the most important thing. You have to talk about it on every company meeting, not only when accidents happen, like some companies do. Geologists in small companies have even bigger responsibility, because they don’t have safety and environmental departments, so the geologist who is in charge of the project has to cover these issues as well. Prevention is very important and we can learn a lot from other people’s experiences. PDAC Health and safety committee has put out Health and safety manual, made in cooperation with 6 large companies. It is available online for free and it is international, therefore I recommend it also to companies in Serbia. One more excellent thing that I would recommend is taking the Health and safety course if you attend PDAC which is held every March in Toronto. In the beginning the price of the course was 500 dollars, but it is now reduced to 50 dollars and it is even cheaper for students. Attending the course can be one of the first steps in increasing the standards of health and safety in geology and mining.

We have one tricky question for the end. What is the most valuable thing that comes out of the mine?

Mine has the effect on the whole community and the economy, but from the health and safety perspective it is definitely a human, a miner.