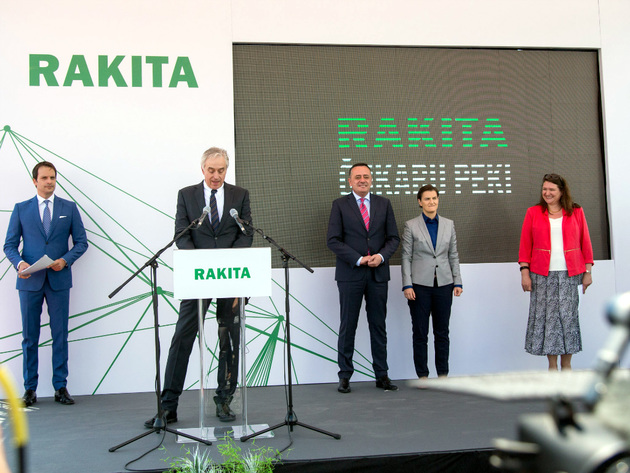 Nevsun’s capital investment in Cukaru Peki project during the exploration decline and mine construction period from 2018 to 2022 is planned to be USD 590 million. During this time, Rakita’s contractors will employ around 1,000 workers, while Rakita Exploration, a subsidiary through which Nevsun operates in Serbia, will have around 150 employees.

In March 2018, Rakita completed the pre-feasibility study for the Cukaru Peki project, and the plan is to complete the feasibility study in mid-2019. Rakita hopes to obtain the permit for the construction and the opening of the mine in this period.

Peter Kukielski, CEO of Nevsun, pointed out that the beginning of the construction which had been officially marked on that date in the presence of state officials, was a milestone, and that the Cukaru Peki project is one of the most developed projects in the world.

– Based on the quality of the resources, the economic indicators and the scope of the planned investment for the needs of the opening of the mine, the Cukaru Peki project has acquired a reputation of one of the best development projects on copper and gold sites in the world – Kukielski pointed out.

He said that it was important for the dynamics of the development of this project to be fully harmonized with the long-term plan and the strategy of the Government of Serbia to increase the share of the mining sector in the GDP to 5%.

As Rakita announced, after the mine opening, during the exploitation phase from the end of 2022 until 2038, it is expected that Nevsun’s capital investment will be additional USD 457 million. During this period of mine operation, it is estimated that Rakita will hire around 600 employees plus around 300 employees that will be engaged by Rakita`s contractors.

Serbian Prime Minister Ana Brnabic pointed out that the beginning of the works was important for an even regional development, as the Bor area is one of the mining centers in Serbia.

– With this investment, Bor could look much different in the next several years. It is important for the government for investments to come here and for people to stay in the country – Brnabic said.

She said that the Ministry of Education would invest more through additional training programs and dual education so that young people would not move out of the area.

Brnabic appealed to local construction companies to get involved in those projects and said that the government would be a partner to the investor, helping similar projects in order to get results as soon as possible and to send a message to people in the Bor area to stay there.

Minister of Mining and Energy Aleksandar Antic pointed out that the date of the opening was “important for the mining business in Serbia and an important step that definitely leads us to the opening of a new mine in the Bor area”. He pointed out that mining was going through an expansion in Serbia and that over 200 exploitation and 127 exploration sites were active at the moment, in which EUR 60 million has been invested in 2018 alone.

Ambassador of Canada to Serbia Kati Csaba said that Serbia had great potential for the development of mining and that it had opened the door to international investments and that Canada was world-renowned when it comes to the development of new technologies and innovative approaches to mining. As she said, the Canadian mining industry is also a leader in the fields of environmental protection and socially-responsible business.

The president of the municipality of Bor, Aleksandar Milikic, said that the future mining activity within the Cukaru Peki project would open new doors for the employment of the local populace, while also preserving the environment.

– The local self-government takes care for all environmental standards in opening a mine to be met. We have had a range of very successful talks with Rakita representatives and each meeting opened a new topic and each topic was solved within ten or so days and it is very important for all of us to work together on this project, with a common goal, which is for the project to begin as soon as possible and for all of us to benefit from it.

As announced, in the next phase, as the Serbian law proscribes as well, an environmental impact study will be prepared.

In addition to the greenfield investment of Nevsun, Serbia and Bor will directly benefit from the Cukaru Peki project through approximately USD 450 million in taxes and royalties.

In addition to the direct investments and spending, Rakita’s contribution to Serbia and Bor will also involve development of local services sector and supply chain. Rakita’s Procurement & Contracting Policy will support and encourage the selection of Serbian suppliers and contractors through the company’s competitive tendering and award process, where Serbian companies compete both commercially and technically and where there is adherence to the company’s corporate standards.

Additionally, during the exploitation period, Rakita will spend more than USD 1 billion in Serbia alone, for operating expenses like salaries, utilities, material, maintenance…

What happens to RTB Bor?

– At the moment, RTB contributes with 0.8% a year to our GDP and our economy, and if we do this right, I expect an additional one percent. A total of 1.8%, then, which is a lot for Serbia’s economic development – Brnabic said.

She said that she expected the strategic partner to be selected in 2018, after which RTB Bor will be “a stronger complex, which will be able to meet our needs for a dynamic economic development in a better and more efficient way”, similar to the contribution of Zelezara Smederevo after a foreign partner was found.

The prime minister said that none of the 5,000 workers at RTB Bor would be laid off.