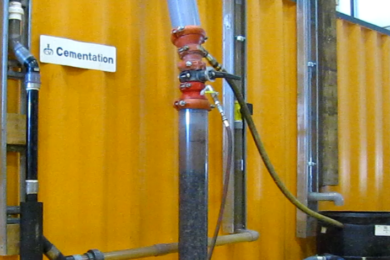 We are honored to announce that our valuable member, Cementation Canada, is ready to inject innovation into the underground mining space.

Injection Hoisting first came to the attention of the global mining audience after Cementation Canada, the technology developers, took the top prize along with KORE Geosystems at the DisruptMining event in 2017. Back then, the concept was viewed as a potential alternative to the labour- and cost-intensive process of shaft sinking.

More than three years later, the concept has developed along with the list of potential applications. This has Cementation Canada, a pioneer in the shaft sinking market, and the man in charge of injection hoisting developments, Alun Price Jones, looking at a much wider underground market for the innovation.

The process as envisaged by Cementation Canada starts with material (ore/waste) being transported to an underground crusher and reduced to <52 mm (2 in). After this, the material is weighed and transported to a hopper, which feeds the raw material directly into a slurry mixture. This mixture is continuously fed through the injection pump and looped piping system before being injected into the flow of carrier fluid by the injector.

Ore/waste rock material is transported in a riser pipe to the surface where solid materials (ore/waste) are separated, with the former transported to the mill for further processing. The by-product fluids, meanwhile, are separated, filtered and recycled.

With the company having recently been awarded C$88,355 ($62,948) of funding from the Northern Ontario Heritage Fund Corporation (NOHFC), IM thought it was the perfect time to get an update from Price Jones.

IM: What will the funding from the NOHFC provide the company in terms of furthering its ambitions with the injection hoisting system?

APJ: Injection Hoisting (IH) offers a unique opportunity for mine operators to consider an alternative to traditional mine hoisting or trucking. The purpose of this funding is to assist Northern Ontario businesses to undertake applied research or pre-commercialisation activities required to further develop new technologies and move them to market. Our grant will be put towards patent costs, basic internal engineering costs, and peer review. The next step is to build a full-scale prototype, and Cementation is now looking to build a working installation in collaboration with mining companies.

IM: Since the IH system was introduced at DisruptMining, how has the concept/technology developed?

APJ: The concepts have been further developed, and the basic engineering advanced sufficiently for it to have been subject to formal peer review, completed by Patterson and Cooke who have worldwide experience in design of material transport systems by pipeline. The review gave a most favourable outlook on the proposed technology and considered some of our initial projected outcomes to be too conservative, and that the system is capable of higher levels of performance.

The IH system incorporates proven and effective existing technologies. The novel aspect of this system is the rock injection mechanism into the lift system, giving rise to a new hoisting methodology, which Cementation has patented. Patents have been granted in several jurisdictions, protecting the IH system for transport of ore and waste rock from deep underground to surface.

IM: What criteria was the proof of concept model built for? What scale is it at? Where was it built?

APJ: A proof of concept, small scale system was constructed at the Cementation workshops in North Bay (Ontario). It was built using clear plastic pipe to study flow, to trial different slurry injection manifolds, and observe mixing, to evaluate the effectiveness and demonstrate production rates with 50 mm (2 in) flow lines over a height of 4 m. The principal of injecting a rock slurry into a constantly moving flow of carrier fluid was verified. The system consistently moved 37.5 kg in just over two minutes, equivalent to over 1,000 kg/h (1 t/h).

The results led into the next stage for an envisioned prototype attaining 24 t/h (circa-500 t/d). Further engineering indicates the IH system is capable of higher levels of performance with projections for commercial systems scaled up to 150 mm (6 in) pipe, or 200 mm (8 in) heavy pipe capable of delivery rates in the range 1,000-2,000 t/d over a vertical lift of circa-600 m (up to 2,000 ft).

Systems would be scalable to perform as mine production increases (production and/or depth increase). Applications would include ore and waste hoisting from any underground mine as an alternative to traditional skip hoisting or trucking.

IM: Which applications currently have the strongest business case/are easiest to employ?

APJ: IH is an innovative alternative approach to conventional hoisting or trucking ore/waste rock from underground mines. The benefits are many and include:

IM: Is there a lot of interest in combining mechanised shaft sinking and development with this type of application where rock cutting could facilitate the size distribution that the pumps require without further processing?

APJ: This could be an Ã¢â‚¬Ëœenabling technology’ for other developments, such as mechanised development or mechanised shaft sinking, to remove cuttings from the face/bottom. It could also be linked with large diameter raiseboring to remove muck the operating mine may otherwise not have the capacity to handle.

IM: What are the timelines for the next phase of the project (to construct and fully install a fully operational system in an underground mine)?

APJ: The next step is to install at depth a working prototype system based on a capacity of circa-500 t/d, and a vertical lift of 600 m. This would be suited to run-of-mine product reduced in size to <52 mm (2 in). The trial would prove the throughput tonnage, and provide the basis for development of a system capable of 1,000-2,000 t/d.

IM: What about potential commercialisation?

With potential commercialisation, initial estimates based on a representative system capable of 500 t/d, from a depth of approximately 600 m, indicate a capital reduction of 30-50%; and operating cost reduction of between 30-70%.

Along with the reduction in capital and operating cost savings, there is time saving potential to reduce the overall shaft schedule by six months. Compared with trucking, the system has the potential for emissions reductions of approximately 12,250 kg/d of CO2. Other situations can be examined using project specific details and specifications.

Future business models for this technology could be varied, and it is open for discussion with interested parties to propose, develop and implement relevant commercial models.