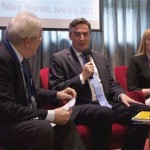 CANSEE participation in the 15th Economic Summit of the Republic of Serbia, Belgrade, June 8-9, 2015

CANSEE Canadian-Serbian Business Association participated in the 15th Economic Summit of the Republic of Serbia in Belgrade, on Monday and Tuesday, June 8-9, 2015.

CANSEE Managing Director, Ms. Mirjana Dončić-Beaton, took part in the 15th Economic Summit which was organized in cooperation with the Economic Institute of Serbia, to attract further attention, as it would give emphasis on the recovery and growth of the Serbian economy, starting from the economic policies and plans of the Serbian Government and followed with the perspectives of doing business in every sector of the economy. “Repowering the Economy” was the main theme under discussion in this year’s Summit.

As an established institution in Belgrade, the Economic Summit of the Republic of Serbia is held each year since 2001. The Summit constitutes an annual survey of political, economic and business development of Serbia and its role in the region and the European Union. The event also serves as an important forum for communication and networking between Serbian and international policy makers, business leaders and experts. More than 400 participants attend the event each year and have the opportunity to learn about the economic policies of the government, while meeting their counterparts from Serbia and abroad.  More information could be found on the internet presentation: http://www.tsomokos.rs/en/projects/details/52/15th-economic-summit-of-the-republic-of-serbia