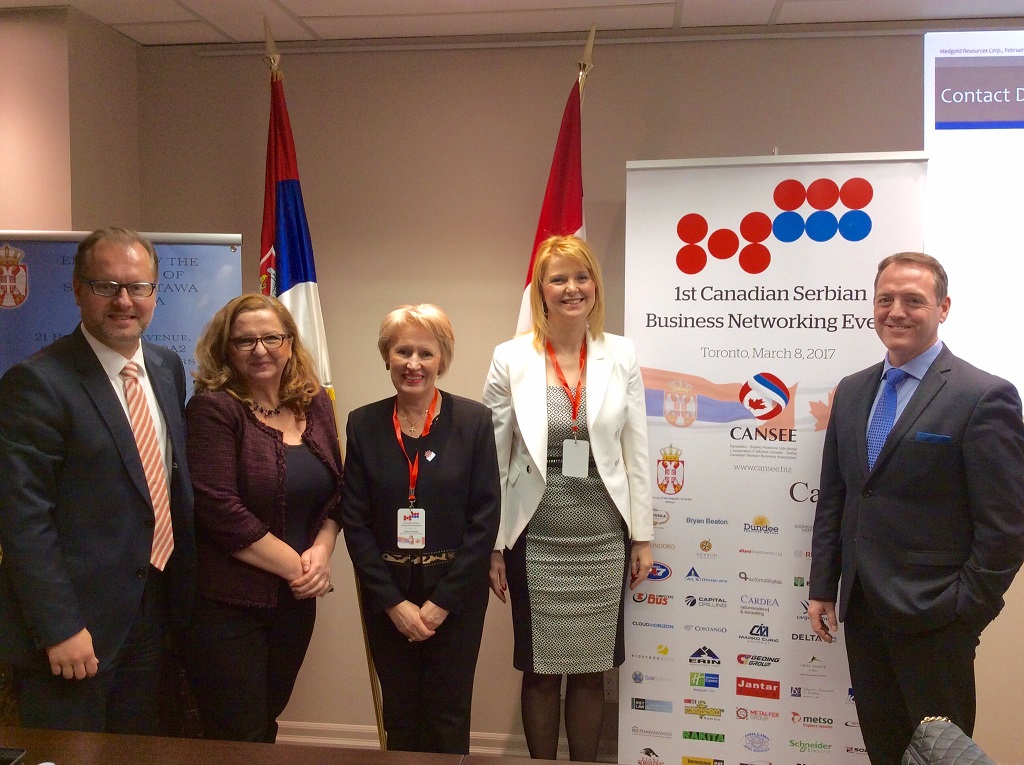 CANSEE Canadian Serbian Business Association, in cooperation with the Embassy of Canada to Serbia and the Embassy of the Republic of Serbia in Ottawa, organized the First Canadian Serbian Business Event on March 8th at the Consulate General of the Republic of Serbia in Toronto. The purpose of the event was to review the state of economic cooperation between Canada and Serbia, to highlight the opportunities, to strengthen and improve bilateral trade and economic relations, and to reinforce contacts and make Canada and Serbia stronger economic partners.

The event was opened by H.E. Mihailo Papazoglu, ambassador of the Republic of Serbia to Canada, and Mr. Kevin Rex, Director for Eastern Europe and Eurasia, Global Affairs Canada, followed by the keynote address of Ms. Mirjana Dončić-Beaton, executive director of CANSEE Canadian Serbian Business Association and Ms. Teodora Dechev, CANSEE Board of directors member and CEO and president at Mundoro Capital Inc and Ms. čurđevka ć eramilac, Trade Commissioner, Embassy of Canada to Serbia, Macedonia and Montenegro who presented the current state of trade and investment between Canada and Serbia, bilateral legal framework conducive for greater trade exchange and investment, role and mandate of economic diplomats – trade commissioners.

The First Canadian Serbian Business Networking event in Toronto was dedicated to promoting existing trade and investment ties between Canada and Serbia. The event reviewed the state of the economic relationship, examined how to build on existing opportunities and how to develop future potential for greater bilateral economic cooperation, based on examples of existing Canadian business operations in Serbia.