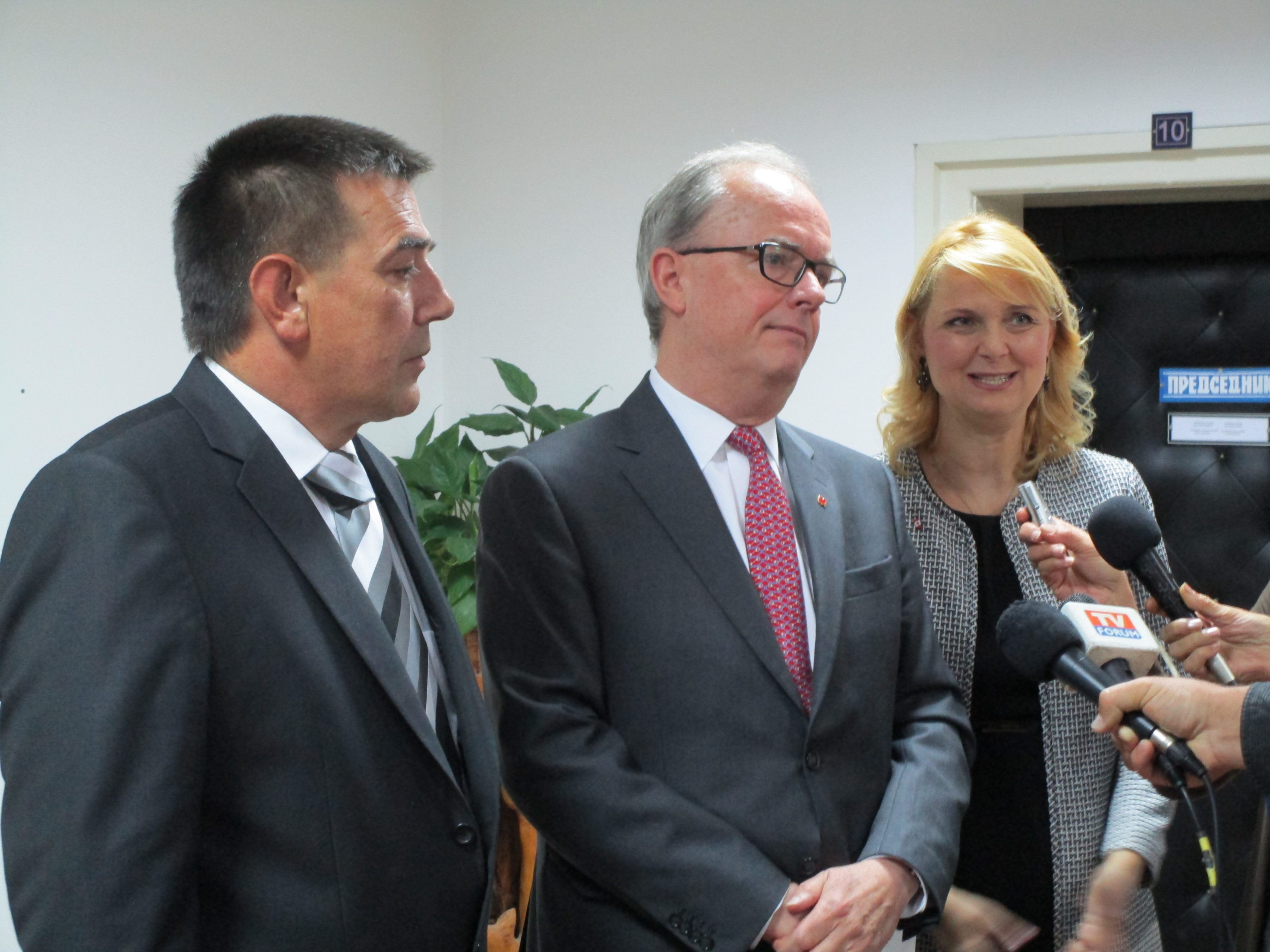 Canadian Ambassador Philip Pinnington, Trade Commisioner at the Embassy of Canada to Serbia, Ms. čurđa ć eramilac, together with CANSEE Canadian- Serbian Business Association delegation, paid a visit to the city of Prijepolje on 6th of September. The purpose of the visit was to visit existing businesses that exists in this region of Serbia, all in order to further develop economic relations and increase trade between the two countries.

The office of the President of Prijepolje municipality organized a warm welcome for Ambassador of Canada to Serbia and CANSEE delegation. Mr. Dragoljub Zindović, president of the municipality, introduced his guests with brief history of Prijepolje, stating that in the past this region was famous for its textile and wood- processing industry. He mentioned the old textile giants, such as Ã¢â‚¬Ëœ’Ljubiša Miodragović”, ”Jasen – Brodarevo” and ”Iris” that were at that time employing over 10, 000 people from that region. According to him, situation is different today and, after long process of privatization, many of old companies are not as nearly successful as they used to be. Ambassador mentioned large number of Canadian investments in mining industry in Serbia, and Mr. Zindović pointed out that at Čadinje, near Prijepolje, exist a deposit of copper which could be very interesting for potential investors. H. E. Philip Pinnington expressed his favorable impression of visiting this multiethnic community, which is very common to cities in Canada.

Also, Ambassador and Mr. Zindović noted that company MDG is a great example of successful business, having in mind that in September last year this Canadian company, owned by Mr. Goran Varaklić from Prijepolje, hired 80 high-educated young people and since then the business is in constant development and expansion.

Following the reception at the Mayor’s office, H.E. Philip Pinnington and Ms. Mirjana Dončić-Beaton took part in the addressing youth participant from this region of the “Caravan of youth entrepreneurship “, that was happening on the same day in Prijepolje as a result of successful partnership between Serbian Chamber of Commerce and Industry and CANSEE. In this year of entrepreneurship, proclaimed by the Ministry of Economics, the “Caravan” was designed to promote to the young people possibilities of entrepreneurship, by engaging them in various practical workshops through which they could learn about the opportunities and challenges of establishing and successfully operating their own companies, which will create new jobs, reduce unemployment of young people and contribute to the strengthening of the domestic economy.

Representatives of CANSEE and His Excellency also visited MDG premises in Prijepolje. After warm welcome from Mr. Varaklić, the tour around the MDG business premises was taken, and guests had a chance to talk with employees from billing department, customer relationships, programmers and sales department. They learned that currently hot-selling items are TV screens and lap-tops. Afterwards, Ambassador and CANSEE representatives talked with Mr. Varaklić about the company’s business operations and future plans.

MDG, Canadian company founded in 1991, is a manufacturer, vendor and distributor of personal computers and other electronic products, appliances and furniture. In 2006 MDG abandoned traditional storefronts altogether to adopt a multi-national Web Store allowing MDG to expand its in-house financing to reach more people.

After a year of business operation, MDG office in Prijepolje has surpassed other working teams in Canada with its outstanding results. This shows that Prijepolje has high-educated and very motivated young people with excellent English and French skills ready for constant improvement. MDG enabled them to get well-payed jobs without leaving their home town, in that way economically empowering the whole area, said Mr. Varaklić.