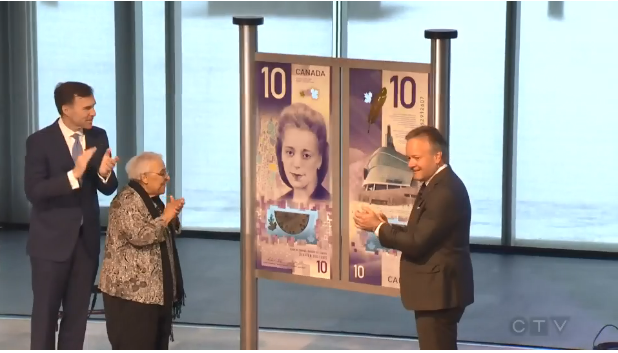 For the first time in nearly 15 years, a Canadian banknote has been named the best in the world. The International Bank Note Society has recognized our new $10 bill as the winner of the 2018 Bank Note of the Year Award. It was selected from a list of 15 finalists, including entries from Argentina, Armenia, Australia and Bolivia. The award is voted on by members of the IBNS.

The bill features human rights icon Viola Desmond on its front and the exterior of the Canadian Museum for Human Rights on its back. Desmond, who is considered a civil rights hero because she refused to leave a whites-only section of a theatre in Nova Scotia in 1946, is the first woman outside the Royal Family to be featured on Canadian currency.

Until the release of the $10 bill, no Canadian banknote had ever had a vertical design. The Bank of Canada says it plans to release vertically oriented $5, $50 and $100 bills in the future. Those banknotes were last updated between 2011 and 2013.

In addition to the design features, the IBNS noted that the bills make good use of innovative technologies and are difficult to counterfeit.

Second place in this year’s competition went to the new 200-franc note from Switzerland. Swiss bills had won the 2017 and 2016 editions of the award. Also finishing in the top five were banknotes from Norway, Russia and the Solomon Islands.

Canada won the inaugural Bank Note of the Year competition in 2004 for the $20 bill released as part of the Bank of Canada’s Canadian Journey series, and finished second behind Kazakhstan in 2011, 2012 and 2013.