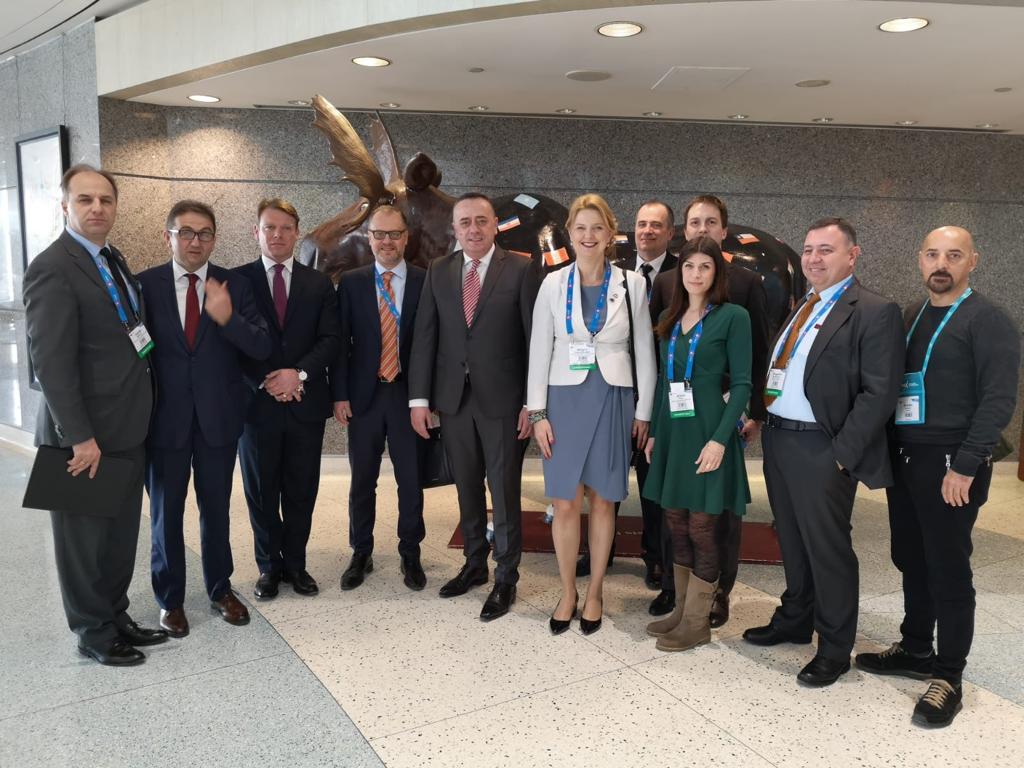 Mirjana Doncic Beaton, Executive Director of the CANSEE Canadian-Serbian Business Association, together with the President of the Association, Aleksandar Obrenovic, the Ministerial Delegation of the Ministry of Mining and Energy led by Minister Aleksandar Antic, State Secretary Stevica Dedjanski and Assistant Minister Ivan Jankovic, as well as the representatives of the Embassy of Canada to Serbia visited for the second time in a row, the PDAC 2020 Convention, the largest international trade fair and mining convention held from March 1-4 in Toronto.
PDAC (Association of Prospectors & Developers of Canada) is a credible and leading mineral exploration institution in Canada with approximately 8,000 members from around the world in all sectors of the geological and mining industry.

Each year, this convention brings together individuals, companies and all organizations active in the mineral exploration industry with 1,000 exhibitors, 3,500 investors and more than 25,000 participants from as many as 135 countries. This four-day convention, first organized in 1932, is held annually in Toronto and has grown drastically across all segments, from growth to impact in the sphere of the global mineral industry. PDAC gives an opportunity to provide new contacts and create potential collaborations among individuals and companies where participants can be informed about the shift in the business of the geological and mining sector and gain up-to-date knowledge of the challenges of responsible business.

This year, the PDAC Convention is hosting more than 25,000 visitors at the Metro Toronto Convention Centre. The ceremony was opened on Sunday, March 1 by Felix Lee, PDAC President, Seamus O`Regan, Canada`s Minister of Natural Resources, and Ed Sackaney, Knowledge and Wisdom Keeper. CANSEE representatives and Minister Aleksandar Antic with the Ministry Delegation attended the opening ceremony.
For the Republic of Serbia, one of the most important sessions was the 4th Annual Western Tethyan Belt Session, which took place on March 1st, and was attended by more than 240 participants. The session was hosted by the Canadian company Mundoro Capital, one of the founders and a respected member of CANSEE, which develops projects in Serbia and Bulgaria.
This session highlights the importance of the Tethyan Belt as an increasingly attractive region for the mineral projects witnessed by all participants and their presentations. This year`s presentation by Aleksandar Antic, Minister of Mining and Energy of the Republic of Serbia, confirmed the importance of Tethyan Belt and justified the invitation of the Minister of Natural Resources of Canada, who, for the second time, honored him and invited him to participate in the International Mining Ministers Summit (IMMS) PDAC .

At the Fourth Annual Session of the Western Tethyan Belt, Minister Antic presented the mining sector of Serbia, pointing out that Serbia has become a country suitable for investment and ranked 4th in European countries in terms of attractiveness for investment in the mining sector, according to research by the Canadian Fraser Institute.

In addition to Minister Antic, the Serbian delegation to the PDAC 2020 was made up of the State Secretary Stevica Dedjanski and Assistant Minister Ivan Jankovic.
A significant number of CANSEE, Canadian-Serbian Business Association members, including representatives of Canadian companies such as Dundee Precious Metals, Mundoro Capital, Medgold, as well as Mineco, addressed the present at the session and supported strengthening Canada-Serbia mining links and developing major projects and investments.
Company representatives presented their special projects in the Western Tethyan belt, outlined all the benefits and challenges in the further progress of the projects, while the government representatives offered regional insight. The conclusion of the session is that the western part of the Tethyan Belt, although abundant in mineral deposits, remains an unexplored region with good infrastructure, skilled local workforce and low-cost service exploration, CANSEE says in the press release.
The same evening, Sunday, March 1st the Canadian-Serbian Business Association (CANSEE) organized a Canadian Serbian Business Cocktail with the goal of presenting Serbia as a good place to invest as the climate has improved for potential investments.

The cocktail was attended by representatives of the Ministerial Delegation, representatives of geological and mining companies from Serbia, as well as numerous representatives of Canadian companies who attended PDAC and had the opportunity to meet and exchange impressions with guests from other industrial sectors.
Ã¢â‚¬â€œ This year Serbia had a prominent place at the PDAC conference, and the vital reason for this is Serbia`s willingness to meet investors and facilitate all procedures regarding contact with ministry officials for faster and efficient business operations. Several major investments already confirm the attractiveness of the site in Serbia, as well as the presence of senior officials from Serbia at the PDAC for the second time organized by CANSEE Ã¢â‚¬â€œ said Stevica Dedjanski, State Secretary at the Ministry of Mining and Energy of Serbia.
Source: eKapija
Cansee
CANSEE News
News