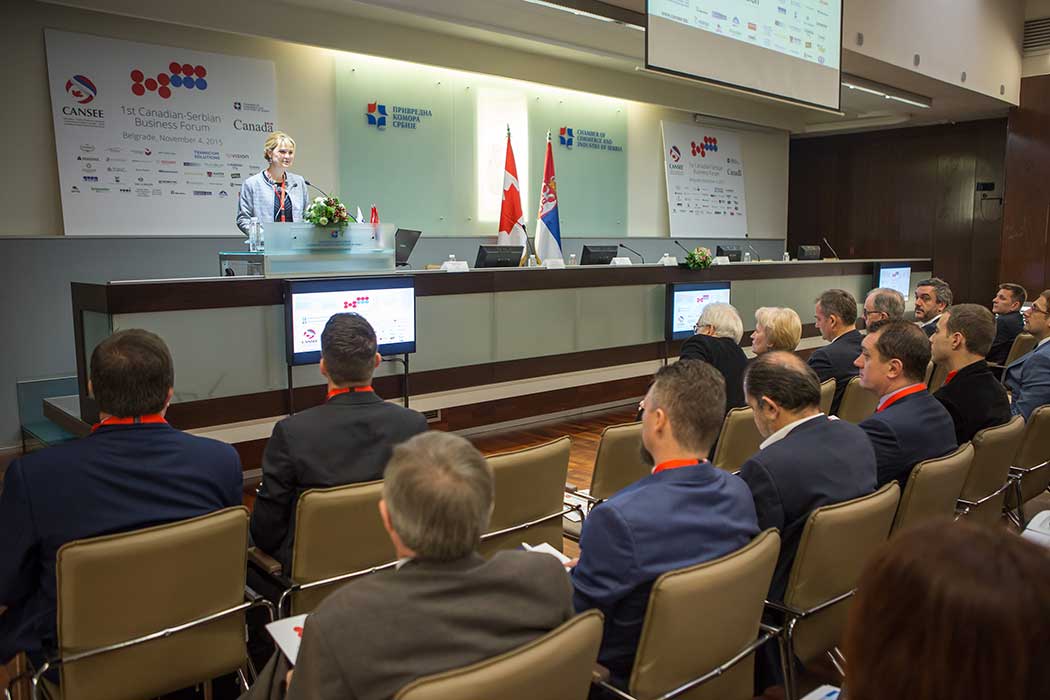 Great potential for improving economic cooperation in the fields of mining, information technology, of agriculture and food industry, pharmacy, energy, hydro and infrastrukture – agreed the participants of the First Canadian-Serbian business forum, organized by the CANSEE Canadian-Serbian business association, in cooperation with Embassy of Canada to Serbia and the Serbian chamber of Commerce.

– In order to develop investment and trade between Canada and Serbia, CANSEE brought together representatives of the Government of Canada and Serbia, the government agency responsible for the promotion of investment and economic cooperation, chambers of commerce, Serbian and Canadian businesses, financial institutions, experts and non-governmental sector – said the President of CANSEE Association, Goran Obradovic.

President of the Serbian Chamber of Commerce (PKS) Marko Čadež said that the potential for improvement of economic relations between Serbia and Canada is much higher than currently realized cooperation.

– Yes, there is plenty of room for an increase in trade, but also for the realization of other higher forms of business cooperation, says the increased interest of Canadian businessmen in Serbia, which, I believe, see it as all the more desirable investment and business destination – a place worthy of their capital – said Čadež.

– Canadian business people can be sure that the suppliers from Serbia are more able to meet the requirements of the markets of developed countries and that the Serbian economy can export higher quality product than it does today – said Čadež.

State Secretary of the Ministry of Economy Milos Petrovic reminded that Canada is one of the leaders of economic growth and development, adding that, unfortunately, so efficient and developed economy is not the best informed about current possibilities of Serbia and our region. He noted that in Serbia more than 50 Canadian companies are currently opperating, and investors from these countries have a long-term intentions.

Canadian Ambassador to Serbia Filip Pinington said that, currently in Serbia Canadian companies are operating in the IT sector, pharmacy, agriculture, the mining sector, as well as that they all feel that Serbia is a good place for business, although there are some problems.

Serbian Ambassador to Canada Michael Papazoglou, addressed the participants of the forum in a video statement and pointed out that the value of trade between Serbia and Canada last year totaled 111 million dollars, and that the value of Serbian exports was $ 80 million, of which 45 million USD export ” Fiat “car. He also said that we are “on the threshold” another billion investment Canada to Serbia, and to the hydro.

First Canadian-Serbian business forum provided Talk B2B meetings, Twitter wall during the period for questions and answers, as well as live streaming of the entire event, which could keep up with web sites CANSEE Canadian-Serbian Business Association (www.cansee.biz) , Serbian chamber of Commerce (www.pks.rs) and the Talk B2B platform (http://canseeforum2015.talkb2b.net/).

– We are very proud to present  relatively new conference technology, so-called “business-to-business’ internet platform, where participants over the Internet can schedule meetings among themselves – says Mirjana Dončić-Beaton, Executive Director of CANSEE.

She emphasized Dončić-Beaton, like organized meetings held during the forum contributed to Serbian and Canadian representatives of the business sector to meet, make the first contacts and provide future business cooperation.