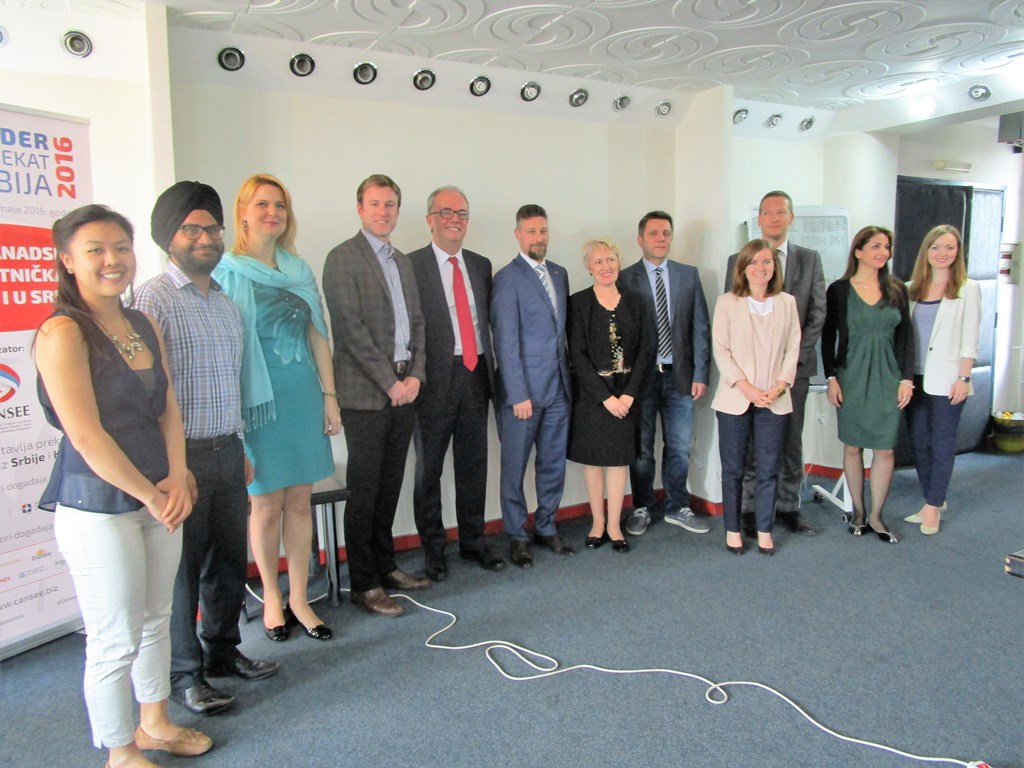 Canadian educational program, “LEADER Project Serbia” from the Ivey School of Business from Western Ontario, one of the top-ranked business schools in the world was officially completed on Friday, May 20, 2016. At the very end of the two-week program, the participants, forming the selected thirty best entrepreneurs from Serbia, simulated the discussion with the investment banks and funds, by presenting their business plans to a seven-member jury.

Following the consultation of the jury, formed by the four Canadian LEADER instructors, H.E. Philip Pinnington, The Ambassador of Canada to Serbia, Mr. Bryan Beaton, the member of CANSEE BoD and Mr. Mihailo Vesović, Head of the Centre for Innovations of the Serbian Chamber of Commerce, the three participants with the most outstanding business plans were announced:  Ms. Marijana Žuvela, Ms. Marija Petrović and Mr.Dušan Jovanović, whereas the winner was Mr.Vladimir Despotović.

“We have managed to introduce this training in Serbia, and we believe it will become a regular practice, while we will do our best to increase the number of participants and the program duration in the future”, at the end of program said the President of CANSEE BoD, Mr. Goran Obradović. He added also that, from its very inception, CANSEE Association defined in its Articles of Association the strategic goal to bring over qualitative educational programs from Canada, whereby the transfer of the best Canadian business practices to Serbia would be actively encouraged.

The Ambassador of Canada to Serbia, H.E. Philip Pinnington, congratulated the participants of the first Serbian LEADER Project on their successful presentations and wished them all the best of luck in the future work. The Ambassador Pinnington, took the opportunity to point up that the economic relations of Canada and Serbia were very good, being first and foremost in the investment segment, and that the most important Canadian investments in Serbia stemmed from the food, pharmaceutical, automotive and ICT industries, whereby the biggest investors were geological-exploration and mining companies

The Serbian Chamber of Commerce, at the premises of which the LEADER training was held, extended great support during the program organization, and as explained by Mr. Mihailo Vesović, on behalf of the SSC, the cooperation had been initiated with the goal that in the ‘year of entrepreneurship’ in Serbia, the development of the entrepreneurship awareness would be encouraged, which as its ultimate result would have opening of new jobs and positions, reducing the unemployment rate in the young and strengthening the industry.

“LEADER program is only one part of the comprehensive cooperation with Canada and CANSEE Canadian-Serbian Business Association. In the territory of Serbia several extremely important Canadian companies have been present, and  it is my feeling that in the future period that cooperation in view of the investments will only expand”, said Vesović.

“For me this has been one of the better days at work, since I have had the opportunity to see rather clever, creative and innovative young people, struggling for their ideas and who are readily willing to show that entrepreneurship in Serbia is profitable”, emphasized Vesović.