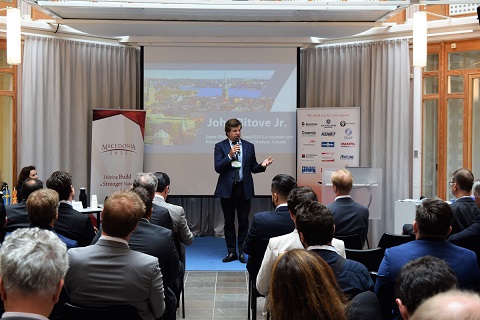 “Our goal is to contribute to the greater inclusion of Macedonia in the European economy, as well as towards the transfer of best practices for sustainable development that Macedonia could implement”. This is the thought that lead the Macedonia2025 Business Forum in Stockholm, Sweden which took place on June 13, 2017. The forum was organized by Macedonia2025, in partnership with the Embassy of the Republic Macedonia in Sweden, and the Stockholm Business Region.

Sweden, as a leading country for sustainable growth and development, was an ideal destination for this forum. This event was a great follow-up to the MK2025 Summit 2016 theme entitled “Envisioning the Future: Renewable energy, environment, and technology”. “Courage is the key and Sweden had the courage to take the lead and be the best example for all to follow”, H.E. Aleksandra Nakjeva Ruzhin stated at the opening ceremony.

Through 4 panels and close to 20 speakers, representatives from industries that actively advocate for the production of energy from renewable sources, development of smart cities and waste management discussed topics related to supporting innovation and opportunities for cooperation between Macedonia and Sweden. “We have a goal to be fossil free by 2040, and we are doing pretty well. Sweden is already working with 90% renewable energy”, Gustaf Landahl, Head of Department for Planning & Environment at the City of Stockholm noted. “In the future, we will use smart energy. We will have smart homes and smart grids. What we need now is digitalization of these systems. This is the future we believe in”, Martin Forsen, President of European Heat Pump Assosciation, explained.

The speakers also promoted outsourcing and investment opportunities to Macedonia. “Macedonia is a great place for producing organic cosmetics. Organic materials are very affordable and are of high quality”, Irina Velevska, CEO of Omega Raw and Organic Cosmetics from Macedonia mentioned.

The official part of the forum was closed by John Bitove (Jr.), who while thanking the partners and everyone who took part, assured the public once again that Macedonia has high potential in renewable energy. “With Sweden being a partner in the development of this sector in Macedonia, sustainable development will follow” – he concluded. Afterwards, the afternoon was left for networking, concluding the evening with wine and tapas, courtesy of the Macedonian Embassy in Sweden. The following day, a boat tour around Stockholm was arranged, with which the third Business Forum by MK2025 was officially closed.

The development of business events of this nature is not something new for Macedonia2025. The previous two Business Forums in Europe were held in Paris and Vienna, all with a purpose to contribute to further improvement of the ties of the business sector in Macedonia and the Macedonian diaspora with professionals from countries that are counted as leaders in EU and the world.

As a crown to their annual events, Macedonia2025 organizes an annual Summit. This year’s summit will be held on 1-2 November 2017 in Skopje, Macedonia.