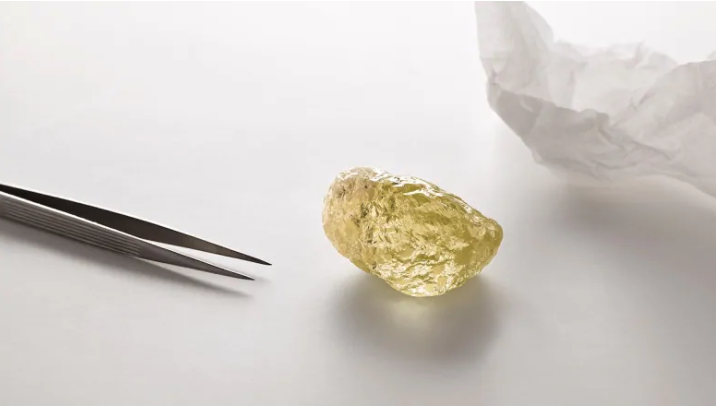 A diamond pegged to be the largest known gem-quality stone found in North America was discovered at a Northwest Territories mine in October, according to Dominion Diamond Mines.

The 552-carat yellow diamond was found at Diavik Diamond Mine, according to a company news release.

Jim Pounds is the executive vice-president of diamonds for Dominion Diamonds. He called the discovery a “miracle.” “It’s one of those rare things,” he said. “A stone of that size and that dimension invariably gets damaged during the process of liberation of diamonds — which is a crushing process.”

Pounds couldn’t say which Diavik pipe the diamond came from, or how much it will be appraised at when it is eventually cut and polished.

But he did say he believes when all is said and down, its natural chicken-egg shape could lend well to a 150-carat, oval, yellow coloured gem. “I hope my dreams for this diamond come true,” he said.

The news release from Dominion Diamonds makes note of how unexpected it is to find an intact gem of this size in the Northwest Territories. Pounds elaborated the reason for this. “Canadian diamonds are some of the oldest in the world,” he said. “They almost go back to the beginning of the formation of Earth itself and individually, Canadian diamonds are over three-billion years old, many of them.”

The Diavik mine is about 300 kilometres northeast of Yellowknife. It is owned by a joint venture between Dominion Diamond and Rio Tinto. The company said the find “far surpasses” the previous record, at 187.7 carats, which was also discovered at Diavik in 2015. The company will select a partner to cut and polish the stone, which is 33.74 mm by 54.56 mm.

When asked where the diamond is right now, Pounds joked Dominion’s head of security might “shoot him” if he were to disclose that information.