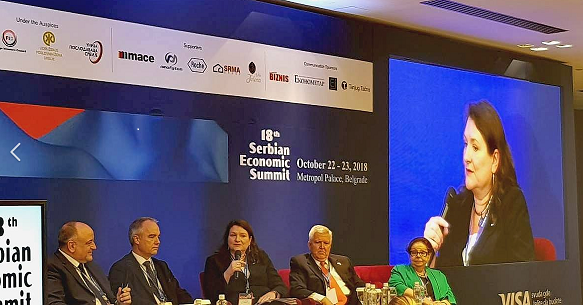 TGI Group International, (under the auspices of the Union of Employers of Serbia, the Association of Business Women of Serbia, the Foreign Investors Council and the Confindustria Association) organized the 18th Economic Summit of Serbia held on October 22nd and 23rd, 2018, in Belgrade.

Among the eminent participants in the program of this year’s Summit was Minister of Foreign Affairs Republic of Serbia Ivica Dačić and other representatives of Government, H.E. Kati Csaba Ambassador of Canada to Serbia, H.E. Kyle Scott Ambassador of United States to Serbia.

H.E. Kati Csaba Ambassador of Canada to Serbia participated in the panel discussion Ã¢â‚¬ËœGlobal Power Shifts and Challenges for the region’. Ambassador Csaba pointed out that answer to the regional challenge is not to move to different system, but to bring people along and ensure that they are felling as members of society and that they are respected by their leaders as well.