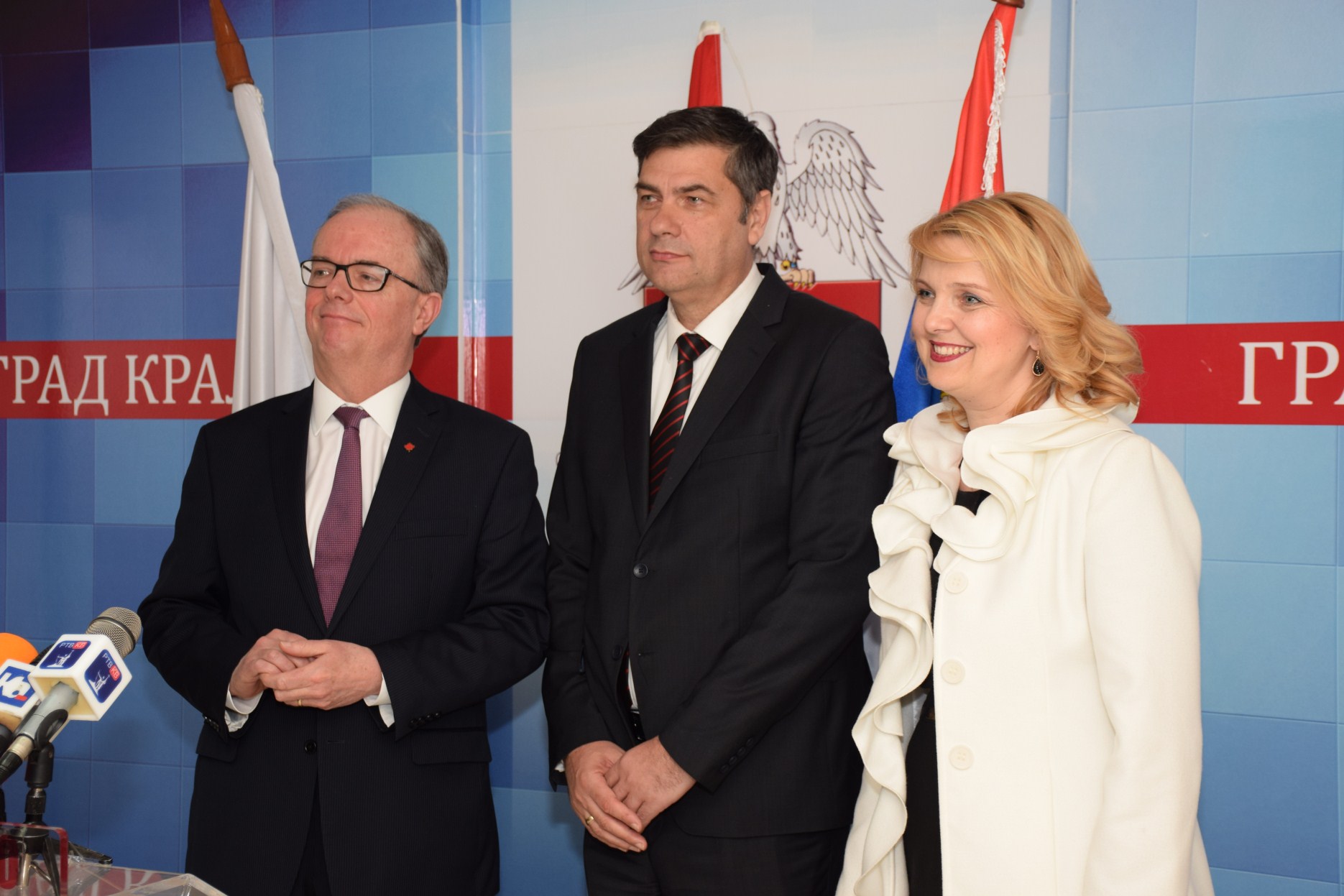 CANSEE Canadian-Serbian Business Association representatives and His Excellency Philip Pinnington, the Ambassador of Canada to Serbia, visited the city of Kraljevo on March 29, 2106, on which they discussed with the businessmen from Kraljevo region about the improvement of business cooperation between the two countries which was given the name “Canada Day in Kraljevo”

Mr. Goran Obradović, CANSEE President, gave a brief overview of the Canadian-Serbian economic relations and data and, among other, explained that during 2014, the bi-lateral trade between Canada and Serbia amounted to about 100 million dollars, whereas the investments from Canada in Serbia exceeded the figure of 1 billion dollars.

His Excellency, Philip Pinnington emphasized that the gathering in Kraljevo, it demonstrated “a solid foundation for investment”.  In his address, he also stressed the significance of CANSEE Association visit, which, according to him, had the opportunity to convey “what the business environment in Canada was and what the scope of assistance regarding cooperation with Canada involved”.

Ms. čurđevka ć eramilac, the Trade Commissioner at the Embassy of Canada, said that investments represented one of the most compelling initiators of these economic relations, and added that more significant Canadian investments managed to find their way in the sectors such as mining and geological explorations, automotive industry, agriculture and food industry, pharmaceutical industry, information and telecommunication technologies and building industry.

Having in view the scope of the given exchange, it is not surprising that it was with a great interest that the Kraljevo businessmen followed the presentation of CANSEE Canadian-Serbian Business Association, which currently numbers over 50 members Serbian and Canadian companies, and the mandate of which comprises gathering together the companies from the South-East European region.

CANSEE Association was incepted in November 2014, in Belgrade, with an aim to encourage the cooperation between the member companies and countries, in order to foster mutually beneficial business and trade connections.
Ms. Mirjana Dončić-Beaton, CANSEE Executive Director, conveyed that Serbia took the 94th place in the world according to certain economic indicators presented at the World Economic Forum in 2015, whereas Canada, at the same list, ranked the 13th in the world.

Talking about the market demands and characteristics of the two counties, she conveyed the conclusions that the greatest number of products in Canada – clothing, cars, household appliances and similar, were less expensive than those in Serbia, however, on the other hand, foodstuff, services and lodging, were more expensive in Canada.

Ms. Dončić-Beaton, during her visit to Kraljevo, stated that CANSEE Association received the concrete inquiries from the Kraljevo businessmen in respect to export of goods and services to Canada, whereby she emphasized that “CANSEE possesses assets and contacts required for achieving successful business cooperation with Canada”.